As a digital design studio, through no specific course of action, we seem to have become a specialist in sport and activity tracking apps.

Beginning back in 2010 with a simple marathon directory, word spread and we started getting more and more enquiries, soon branching into full scale projects such as World Walking, Ramblers and Big Team Challenge.

This is what led Glasgow’s Queen Elizabeth University Hospital to our door and took us down the long and eye opening route of game design and development.

From the initial meetings we held with the hospital staff and funders at Glasgow Children’s Hospital Charity, it was clear that they were after some method of both motivating children to aid their recovery and for the staff to be able to track the patient’s progress as they did this. A clear inspiration for the project was World Walking’s website and app, that uses your real life activity to move you along a virtual route. It’s a tried and tested method that has been very popular amongst it’s 20,000+ users, however there’s a catch, most of World Walking’s users are adults.

When it comes to specifically capturing the attention and imagination of children, you have to approach every aspect of a project from a different perspective. For this concept to work we would have to abandon our pre-conceived notions of what an activity tracker should be and explore new avenues of creative thought. During the research phase it became clear that not only was developing a game our best chance at creating an engaging tool for the hospital, but was a fantastic opportunity for our studio to hone a completely new set of skills.

Delving right in, the first challenge for developers Michael Park and Fergus Howe was to find the best software for creating the game itself. The decision came down to the two main applications: Unity and Game Maker Studio 2. After testing on both platforms, Game Maker Studio came out ahead in the end and so began several weeks of testing the limits of the system and exploring how we could utilise this new tool. 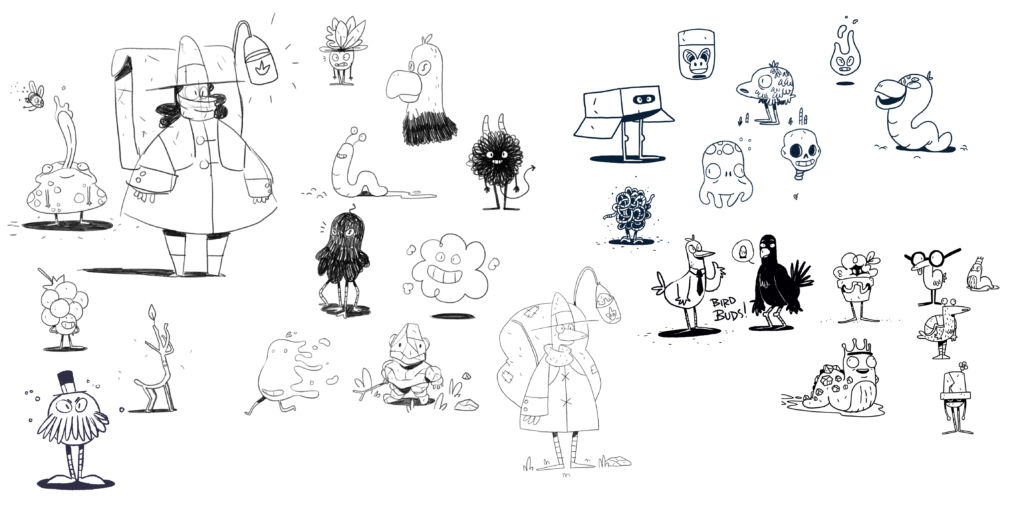 As with every project there are inevitably compromises that have to be made between what you dream the project can achieve, and what the time scale will realistically allow. For us an incredibly tight deadline of 6 months was the monster we had to bear and so we had to set in motion a very clear timeline of research, design, development and testing. Ideas had to be refined, refined and refined again so that when it came time to implement, nothing was wasted. What came out of this was an idea to create a game set in a “fantasy” setting, with the main character set out onto a world map to travel, discover and record the towns and “critters” they came across.

Choosing to use “collection” as the main game mechanic not only allowed us room to expand the game if we had the time, but also gave us the opportunity to be creative with the elements, their design and even the story behind them. One major example of this was our choice to add in a “trading card” element, which the player can collect throughout the map.

Our next big problem solving session came in the form of tracking the children’s real-life physical activity. After several approaches including the possible use of GPS trackers or pedometers, we settled on a much more inclusive form that wouldn’t rule out users without these devices. Our solution was a much simpler idea: we would simply ask the users what activity they had done.

Each activity they choose has a corresponding ‘Gold Coin’ value and the more time they spend on that activity during the day, gives them a higher reward. To help reduce incorrect inputs, we added an extra step that requires a parent or guardian’s pin number input. It’s not a perfect system, but it’s one that we feel is the best possible solution to a very specific requirement for a project.

Currently the app is being piloted in the hospital with a closed off registration, so unfortunately the app is not open to the wider public. But if the test phase is successful there are plans to develop the game even further and open it up.

Working on this project has allowed Papertank to stretch some development, illustration, animation and storytelling muscles we don’t often get a chance to show off. We hope that the internal testing phase is a huge success for the hospital and look forward to working on it further in the future. 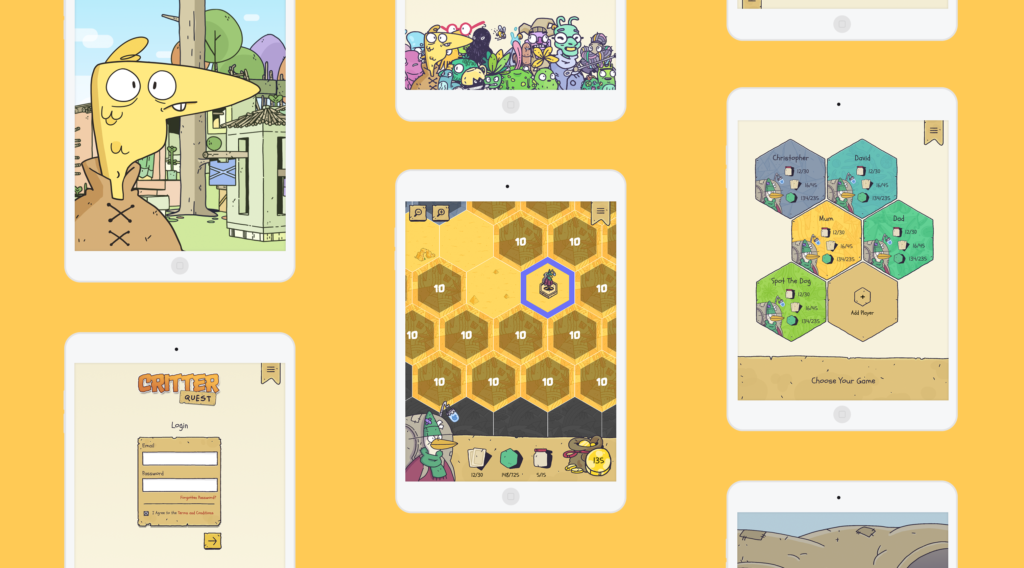 This year has been a big one for us in terms of App Development. Not only have we been producing a variety of our own projects (Trivia Night and Sharpen) but we’ve had the amazing opportunity to work with some really exciting institutions.

Glasgow Life
We were fortunate enough to get to work with a selection of Glasgow’s finest museums this year, producing both in-house exhibition apps and appstore releases.

Century of Style
This beautiful exhibition of 19th-century clothing comes from Glasgow Museums’ collection of European costume. The app allows you to delve into details of each item and discover its history in greater detail, as well as zoom in on some of the finer details using high definition photography.

Scotland Street
Scotland street has always been a hub of information for the history of local schools and those that attended, but a lot of the information has been difficult to obtain.
A new push has been made to digitise a lot of the old records and photos, with a custom app being displayed on iPads throughout the museum to help suers interact with it.

Visit Scotland Street Museum for a hands on experience with the app.

Archaeology Companion
Kelvingrove Museum has always been home to a hugely impressive collection of archaeological treasures, ranging from stone age to medieval periods.

In order to bring their new exhibition to life, the museum commissioned us to produce an iPad app that would allow visitors to learn and discover interesting details about the individual items on display. Along with the detailed records, the app also allows users to zoom in on high definition imagery and even pinch, zoom and ‘spin’ detailed videos of certain objects for a closer look.

Visit the museum’s Study Centre upstairs to interact with the app in person or download free from the AppStore.

Trivia Night App is our latest adventure into the world of Apple Operating Systems. This time with the (as yet) uncharted Apple TV.

With the new hardware’s upcoming launch announced to the world, our long time collaborator Michael from Turing came to us with the idea of creating a tvOS trivia app, that players could interact with using an iOS version on their phone or tablet, essentially creating their own personal controller.

The game allows up to 6 players to join into a points based trivia game hosted using the Apple TV. All that is required is for the users to download the free companion app onto their phone or tablet, make sure wifi or bluetooth is turned on and follow the simple instructions.

For the past couple of months we’ve been quietly working away on a really exciting project with NHS Scotland. Now that it has officially launched, we can tell you all about it

Each year NHS Greater Glasgow & Clyde and Glasgow City Council hosts a staff walking challenge (Active Staff) during which participants work in a small team and count their individual daily steps taken. The team’s steps are totalled and added towards a distance target. Up until now, this has been done manually with thousands of emails, spreadsheets and manic step-counting.

But the Active Staff challenge is walking towards a bright new future with the launch of our website, iPhone and Android apps to help make this monumental task a lot easier – and fun!

We took the existing World Walking (worldwalking.org) system and app and started to work out how we could develop this into a standalone solution for both the NHS and Glasgow City Council staff. With enthusiastic responses for our initial concepts from the client, we set to work on planning, designing and building the apps and website, working with our resident mobile developers and friends, Michael Park and Fergus Howe.

This year’s ‘virtual’ route allows teams of 5 to race the Queen’s Baton Relay around the Scottish leg of the tour, starting in Edinburgh and ending in Glasgow at Celtic Park on 20th July 2014. Participants can log in to the mobile app or website to add their distance in steps, kilometers or miles as well as tracking their walk accurately using the app’s GPS tracker feature. Teams compete for 1st place on the leaderboard, plus individuals can gain achievements for their activity and distance.

Over 4,100 staff users have signed up for the 2014 challenge using our new apps and we look forward to seeing the results and feedback in the next few weeks. Let the challenge begin!

Note: Registration is limited to NHS and Glasgow City Council staff only – a valid payroll number is required.